here volunteers tell you about their trip experiences....... 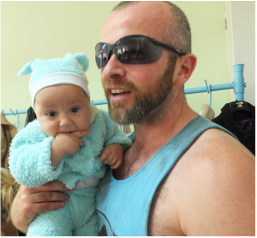 Lee's prior year comments have been updated to 2017

Why did I volunteer?
2015: I have a privileged life, granted I don't own a yacht or a fancy car but I am under no illusions that it is a life of luxury. If I can take a little time out of my selfish existence to benefit those less fortunate than myself then I will always jump at the chance. Thank you TEECH for giving me this opportunity.
2017: This was my fifth summer project with TEECH. I believe the work that they do is fantastic and to see the benefit it provided and the gratitude of the local communities first hand is a priceless experience.

What was your role in the project and what did it involve?
On this occasion I was very privileged to be given the role of project manager. This involved ensuring that each of the project teams were adequately supported and that we had solid communication and cooperation. Most of this was achieved by a daily briefing to highlight progress and challenges and regular verbal updates during each working day. I also had a lot of hands on involvement, mostly with the external drainage work and the flooring, pointing and painting etc.

What were the highlights? It may sound a little silly but putting the onion (septic tank) in the ground manually. We had a load of the team around holding on to cargo straps and planks whilst others walked this huge thing towards a cavernous pit. Nailing the operation bang on first time was awesome and a lot of fun. It is always the little things that I enjoy the most.

Would I do it again?
Absolutely,no doubt.....there is a lot of work to do out there and I need to play my part.

If you would like to sum up your experience in a 'quote' what would it be:
You won't understand the magic until you experience it yourself.

TEECH, the little charity with the biggest heart. Thank you once again for leaving me tired, exhausted, starving and endlessly happy. 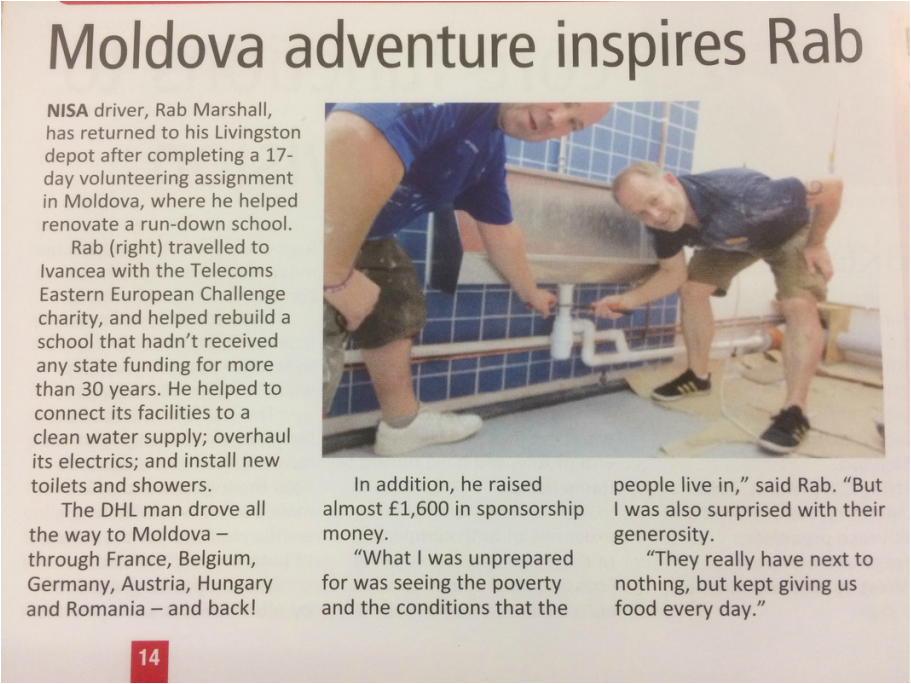 Quotes from Wendy and tom

Tom, Northants, 2015 Project : The most rewarding fun you'll ever have, its worth going for the experience. The TEECH trips are not just open to BT staff so if you know someone who would be interested or you think they'd benefit from the experience get them to check it out.

Wendy, Coventry, 2015 Project:
I'm another privileged BT colleague who attended this years challenge. If you can spare just two weeks in the summer to go, do it. It is so rewarding, something everyone should experience. 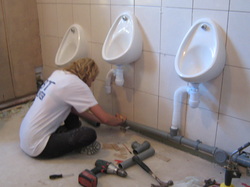 Why did I volunteer?
To try something new, give something back, meet new people, make a difference.

What was your role in the project and what did it involve?
It varied - painting, plumbing, laying lino, digging....anything I wanted to try.

What were the highlights?
I liked that I had the opportunity to get involved in different things, and felt I directly contributed to the project. It was also great meeting different people of different ages from all walks of life.

Were there any low points?
The long coach journey.

Would I do it again?
I would definitely consider coming on another TEECH trip, however the long coach journey may mean I would choose another volunteer project where I feel I'm spending my time adding more value.

Would I recommend the charity to a friend?
Yes - A great experience, great people, a big challenge

Why did I volunteer?
It is something I have always wanted to do. TEECH has been a big part of my dads life for so long now and I have heard many stories about the good things that the charity has done for people.

What was your role in the project and what did it involve?
I was mainly involved in the Carpentry but had volunteered as a driver as well, so the fun began for me before I had even left the country.

What were the highlights?
The drive there was tiring but brilliant. I found it very settling that everybody seemed to get on with each other and help out where ever needed.

Were there any low points?
I was quite concerned when the local shop ran out of beer but a delivery from the local Mayor sorted that out.

Would I do it again?
If and when I am able to commit to it again I will not hesitate to volunteer.

Would I recommend the charity to a friend?
Yes and already have done.

Why did I volunteer?
I really enjoyed the last two trips and felt that I really couldn't miss out on this one.  I've seen that there's a lot that can be done to help countries like Moldova and even though I don't have a skill as many others do I wanted to come and do my bit, whatever that may have entailed.

What was your role in the project and what did it involve?
My main role was being part of the painting team.  This involved me joining a team of painters and pretty much paint by numbers job.  We were filling in the drawings that Amy drew.  It was great fun working with the team and we could put our own stamp on most of the murals by choosing the colours that we wanted.

What were the highlights?
The whole was a highlight, but to narrow it down I'd have to say the village was my highlight.  Every year the people I meet seem to be more and more generous.  For people that don't have much they sure like to give you the world. Everyday we had people turing up with food and wine.  They wanted to take us out and show off their village which I find really inspiring.  It's great to see people really proud of where they live.
One night in particular stands out to me.  This was the concert night where the villagers had worked really hard to put together a performance to welcome and thank us for visiting their villlage.  It was a great night filled with music and dancing... and also a lot of sweet on my part.  Moldavian's really can dance us under the table!!

Were there any low points?
Some parts of the trip were difficult.  These were more to do with the conditions the people live in.  One day I went with a few other volunteers to visit an old ladies home.  This was such a great experience and one of the great reasons why  I find volunteering with TEECH so rewarding.  I got to spend some time with the ladies and although it was lovely to see they had a clean place to stay it was also very sad to hear their stories.  Many didn't hear from their family and some had turned up with nothing, no clothes, no money , NOTHING.

Would I do it again?
I would certainly do the trip again.  I've never found their to be much to improve with the charity.  Many things on the trip are really hard to plan as so many things can change.  I find that if anything does happen that changes the plan then things are quickly dealt with.  This shows just how great the team are that organise the trip.

Would I recommend the charity to a friend?
I have always recommended the charity and will continue to spread the world about the great work TEECH do!!

Why did I volunteer?
I am always looking for new challenges and enjoy driving lorries.

What was your role in the project and what did it involve?
Primary role was driver. On site I spent most of the time with the joiners. Helping to :- Make good the floor with wood and concrete, Create new doorway for boys toilet/ shower room, install stud walls, install toilet partitions, lay lino. Additional role (in the Royal Navy I was taught never to volunteer, I had clearly forgotten, but it was a long time ago) I ensured that those disgusting toilets (the ones the children of the school experience everyday outside) were cleaned each morning.

What were the highlights?
The Sunday evening concert and dance.  Those going around in a circle dances are more complicated than they looked and I never did fully understand that one where you had to pick up a hanky and get a kiss.
Mayor Damian saying 'What have you done to my village, 'Everyone is so happy'.
It was brilliant how quickly we all became like one big happy family and all looked after each other. On the last night, with a number of others, had worked through until about 05.15 am finishing various tasks and helping with the final loading of the 18 tonner so pleased that against what had seemed a day earlier an impossible deadline all was complete.
After everyone had got on the coach and we were about to leave, I decided to go and have one last look at what we had done.
Everything looked so perfect but I think it was the surprise sight of the little final touches of shower gel in the shower rooms and the colourful sponges behind each of the sinks that caused me to shed a tear or two.  An unforgettable moment.

Were there any low points?
On the Monday night, I finished work at around midnight (the 3rd time that I had worked really late) and went to bed thinking that we had no chance of getting even close to completing the project before we would have to leave. It was so disappointing.

Would I do it again?
Yes, definitely.

Would I recommend the charity to a friend?
I regularly do.