the shoeboxes have been hand delivered.......

The team of volunteers left England on the 27th December to start the journey across Europe, arriving in Romania the following evening. A few days were spent in Romania delivering gifts to those TEECH have know for over six years from prior summer projects, visiting Tileagd, Miercurea Nirajului and Galesti. The journey on into Moldova would be achieved before new year, in time for customs and their holiday closure! The weather started off mild and then turned to snow and minus 10 degrees.

The summer 2016 project will be in the village of Ivancea, therefore the team spent a day at the school giving out shoeboxes to the children and also food parcels to the older generation in the village who are not able to get out of their homes easily.
Hospital Beds from Harwich Hospital obtained by Mary Rothwell were delivered to Nisporeni Hospital, which are much needed. The current beds in the hospital are in poor condition and are very basic to say the least. TEECH was award a 'gratitude diploma' from the Nisporeni region to thank the charity for the support given to the region over a few years in terms of aid and sanitary conditions.
TEECH would like to THANK everyone who completed shoeboxes and food parcels. A total of 1,700 were donated which made the trip such a success. The team would also like to thank Bob Parfitt of Refugee Relief for donating new shoes and coats which were extremely welcomed. Ora International, particularly Veronica Martinuic for organising the paperwork for the lorry and providing accommodation. Thanks also goes to hosts at every location the team visited, providing food and a place to stay for us all.
TEECH received thanks for one teacher in Romania (see card below) and from the children in the photo below from a small school in Maiad.

further pictures of shoeboxes can be viewed here
​

We are now recruiting for the August 2016 project. It will be in the village of Ivancea, Moldova. A team will once again work in a school which has no indoor toilets and requires toilets, running water connect (hot and cold), sinks, driers, new lighting, new windows and much more!  Please spread the word and get in touch to sign up. Thanks 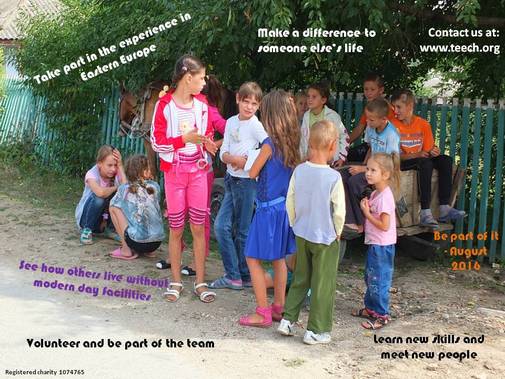