A team of volunteers have just returned from Romania and Moldova delivering over 1,600 shoeboxes, food parcels, blankets, clothing and toys to those in their homes and at many schools. We would like to thank all those who donated boxes and other items to make the trip possible. We would also like to thank BT once again for supplying a lorry and covering its expenses to enable us to take so much aid. Here is an account of the trip....... 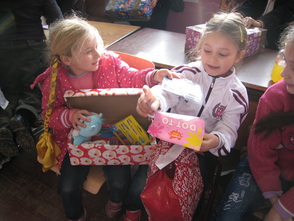 Saturday/Sunday 28/29th December 2013
Day one, and five volunteers set off from England at 6am, to start the long journey over to Romania, which would take us until Sunday evening. The weather in England was on our side even though we had storms that week but once we docked in Calais it was pouring with rain! This was not quite the Christmas snow scene we were hoping for. We reached Romania late afternoon on the Sunday. 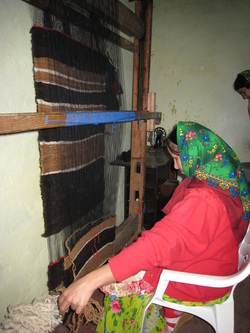 Monday 30th December
Today we would travel to Tileagd a small village about an hour inside the Romanian border to deliver materials to a group of Ladies called the ‘Flowers of Tileagd’, who hand make bags and rugs for sale in the UK. We were shown around the village and the loom on which the ladies work. It was nice for us to see their craft after many a year delivering and transporting items to support them.
We then traveled onto the village of Maiad where we stayed with Zoltan and his family who TEECH supported a few years ago with a project in surrounding villages and at the school. We would leave shoebox parcels ready for when the children returned to school at the beginning of January.

Tuesday 31st December
In the morning we travelled to another village called Budiu Mic (picture above) to visit a school and hand out gifts to the children. The children had gathered at the school to meet us even though they were on their Christmas break. The children had prepared a little speech for us and it was nice to see them once again (TEECH visit them annually to provide aid and shoeboxes when possible).
In the afternoon the team drove onto Comanesti, further east, where the late evening would be spent enjoying the fireworks for New Years and being welcomed by Adrian who kindly allowed us to stay at the Robert Cole Centre. 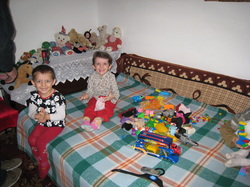 Adrian spent the day with the team, taking us to the homes of those who require support and would benefit the most from our shoeboxes, food and blankets. The photo at the top of this newsletter shows just one family and their home where the roof was falling in! We visited about 20 families and were warmly welcomed into each one to see how the families lived.

In the evening we traveled up to Targu Frumos for an overnight stay before heading into Moldova in the morning. 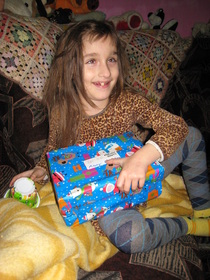 
The challenge for the next two days was to travel into Moldova, through the border and ensuring the lorry was passed by customs before the weekend, which would be the start of the Moldovan Christmas holidays. We were lucky enough to stay with Veronica of Ora International who also provides the help required with the vehicle paperwork.

On the evening of the 3rd four further volunteers arrived by air to join the team for the rest of the trip. 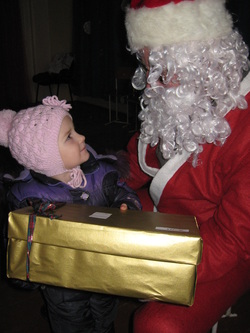 The team would travel to the villages of Grozesti and Zberoaia today. It would be our first day of thick fog and this would continue each day of our trip. Unfortunately the weather was quite mild for Moldova and there was no snow this year. Our first stop was the school in Grozesti where we had been invited by Carol Stadden an American lady in Moldova (as part of the US Peace Corps). Many of the children from the village had gathered at the school so that we could hand out shoebox gifts from Santa.
In the afternoon we would visit Zberoaia where TEECH completed their summer 2013 project. It was nice to return to the school and meet with the Director Maria and the Mayor Damien once again. All the children of the school assembled in the hall and sang and danced for us before we gave them all shoeboxes.
The teachers from the school then cooked for us and we were given a tour of the local bakery in the evening, where women were working during the evening to produce the bread for surrounding villages for the next day. The bread is very nice!!

Overnight we were very lucky to be put up by the mayor in his home.

We left for the village of Balanesti in the morning, to visit the village and school. The team were split into two and taken around the village to deliver shoeboxes to many homes.
As well as looking around the school (as this may be our 2014 project), we were also invited to see the kindergarden, where the head teacher had prepared us lunch of rice, chicken and salad of carrots and cabbage.

In the evening we drove up to the city of Balti where we would be basing ourselves for the remainder of the trip.

Alexandri on the outskirts of Balti was our destination for today. The poorer families from the village gathered at the community centre to meet us, welcoming us with bread (traditional). We were able to give all the children shoeboxes along with some knitted jumpers and blankets for those with young families.

In the afternoon we would travel back to Balti and visit further families during their Christmas Eve. 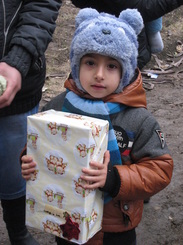 As it was Christmas day we treated ourselves to a lie in and then later in the afternoon joined another group from a church from Balti for an evening of Carol Singing. We traveled to a village and drove/walked around the village listening to the church group singing carols in Romanian and we were able to hand out shoebox parcels to people in their homes. 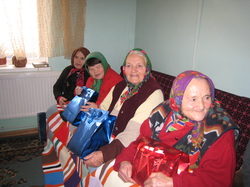 Wednesday 8th January
Sharon Eason who runs a home for the elderly in a small village called Risipeni welcomed us today. We took blankets and gift bags for each of the ladies she is looking after currently. We then visited an orphanage in the village and once again dressed as Santa to give gifts to the children.

In the afternoon the team split into two, with one team visiting families in the village to provide gifts and food parcels, and the other travelling down to the capital Chisinau to meet with the UK Ambassador Phil Batson to explain to him the work of TEECH. He agreed to support us where he can and visit our project in the summer.
Thursday 9th, the flying team would spend the day delivering shoeboxes to a village near to Balti. All shoeboxes at this stage were then delivered and it was time to return home for us all. The driving crew would leave early on the 9th and the flying team would returned home on the 10th.
To view further pics please click here.
To view a short video, produced by Joelie please click here.
Packing Dates - 15th of February and 15th March - we look forward to seeing some of you there.